As video on the web evolves into a fairly standard medium, it starts to offer some real benefit for TV. On the one hand, you can show/sell shows on the web, that are not successful enough for TV placements or that are so successful, that people will pay a couple of bucks per film or episode.

Now I read, that Axe Webisodes are destined for TV. Since the show attracted millions of viewers online, it will now be put on regular television:

„Evan and Gareth proved this model online, and we’re excited to translate it to television, where it has a ‚pre-sold audience‘ of millions of unique viewers who’ve already been enjoying the comedic adventures over the Internet for a year.“

I am pretty sure, that producers will look at the web as a medium to test new shows, content, etc. more than ever in the future. i.e. find out, if your content is good enough to capture the attention of people, before you waist thousands (millions) of dollars putting it in front of a uninterested TV audience.

A couple of weeks ago I noticed skypecasts for the first time. An amazing concept. You create a skypecast to which up to 100 people can join in. As the moderator you can decide who gets to speak (you could also decide to have a monologue for 2 hours – might be your last cast that people join).

In theory, this opens the door for massive multi-chatter audio chat sessions (MMCACS – a term I just made up 😉 )

Skype already lists pages of Skypecasts that anyone can join – Irish language chats, church-casts, business briefings and tech webcasts. It’s like call in radio on the web – and the advantage is that the host can record the conversation and post it in podcast format to iTunes or their blog. (PSFK)

Now PFSK calls it „call in radio on the web“ – but the true fascination will come from topical chat sessions, where 20 people can discuss, say, a worldcup game, for example. Just like the Italy vs Ghana as I watch now.

It might get too noisy, as people try to grab everybodys attention. But then again, people will get to learn some „conference call etiquette“, as it is already common in the business world. And those who do not play by those rules will be kicked out of the chatsessions.

Can you already hook up Second Life and Skype(casts)? I think this would be the next logical step.

Here is some more info .

And here is how it works.

The Kinsey of Clicking

The Kinsey of Clicking is a very interesting research into todays love&web culture by Wired author Momus.
He asked the readers of his blog a few questions, which he gathered and summarised in a report later published at wired.com.

Like the intrepid Dr. Kinsey himself, I didn’t hold back from darker questions, either.

Check it out. Or even look at the full material at his own website.

The Adidas Chapel in Cologne

Crazy, the kind of ads this worldcup inspires.
Advertising for peanuts pointed me to the The Adidas Chapel. They painted the ceiling of the main trainstation in Cologne to look like the Sixtine Chapel by Michelangelo… 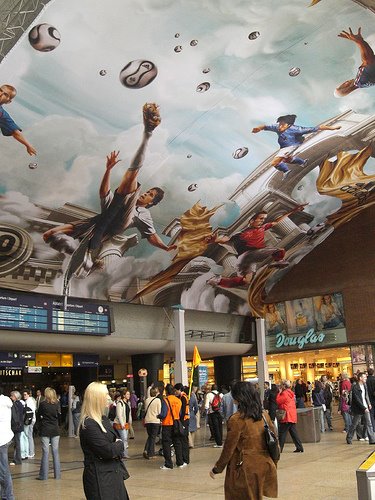 Absolut Vodka has a new online game out: similar to other campaigns I have seen already, this one is once again about spotting things in a large messy picture. 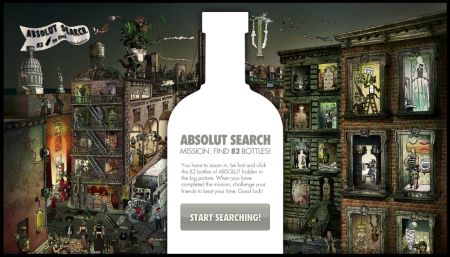 In this particular game, you need to find 82 of the typical Absolut bottles within 2 minutes. I guess with some practise you can do that, but certainly not on first try. So this one is good for repeated and prolonged brand experience!
And it fits well with their well-known advertising concept.