A post at psfk pointed me to the fact that BBC 1 is doing a huge party in Dundee, Scotland, for real, and in Second Life, for virtual. They also pointed me to Wonderland who have some more detail on that party.

I myself stumbled upon that party just a few hours ago, however by accident. I tried Second Life for the first time today and tried to find places with lots of stuff happening.
Sofar, I noticed a lot of Casinos and places for „mature“ events, if you know what I mean. Having spent 2 hours in there, I could easily get the impression the whole place is a giant virtual red light district. On the other hand, I have seen a couple of places that look like good old suburbia, almost like Brookfield, Wisconsin, where I spent a year during a highschool exchange…

I saw many strange things in my first two hours in Second Life – may be I will open up a whole new blog category and write posts just on that.

But back to the topic: I noticed a lot of avatars spending their time at one single location, which turned out to be the BBC Site: 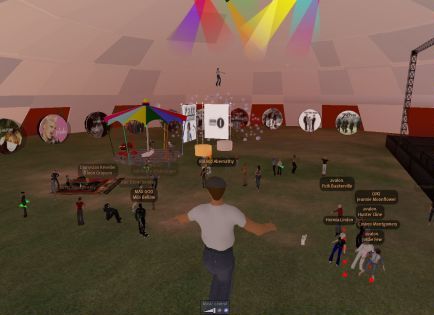 Now it looks rather empty, but when I first got there it was literally packed

I didn’t know at that time that this is a special event – instead I was quite impressed that the BBC does what I considered a sponsorship of a certain „party-location“.

Now, as I know the background, I am even more impressed: they take a real event online into a virtual world to let everyone outside Dundee, Scotland (i.e. everyone) take part in the event.

And they even get some advertising in there – at least some big circular billboards for artists that (I assume) they promote.