Adverblog points me to it first:

Google and Nike have partnered to launch Joga, an online community for football fans „by invitation only“.

The site is Joga.com, as in Joga Bonito: „Play beautiful“.

Since it is, sofar, „by invitation only“, I have no idea what it looks like inside. And I haven’t found a blogger who has seen it. So here is the view from the outside. 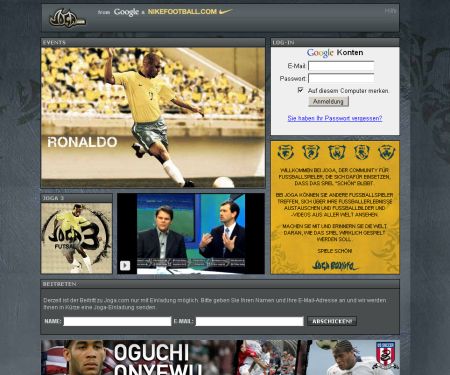 As soon as I get my „invitation“, I will let you know more.

On the login page you can see a video with one of the soccer heros of the 90s, Eric Cantona, hijacking a german television station. (Shoving away two very boring sounding German anchormen – and I may say that, being German myself.)

His message in the video is clear: joga bonito! And while he preaches what will hopefully be the new mantra for the worldcup this year, you can see lots of nice tricks and gameplays in the background – mostly by brasilians, but that’s natural, isn’t it. Both in terms of reputation and sponsorship by Nike.

Very good idea, everyone will appreciate that call for beauty in soccer-gameplay this year.

But for Nike and Google it’s more than that:

Joga.com is a free network where members will be able to create Web sites and send e-mail, photos, and video clips, as well as access Nike content related to its sponsored athletes such as Brazilian superstar Ronaldino or U.S. soccer prodigy Freddy Adu

Writes Businessweek, and continues later on that page:

For Nike, Joga.com is the latest example of how it is keeping in touch with its core consumers: young males who increasingly get their information from digital sources. As evidenced by sites such as MySpace, young teenagers and college students connect online, communicate through instant messaging, and spend hours surfing the Web. Nike’s new soccer-marketing campaign, „Joga Bonito“ (play beautifully), is mostly aimed at reaching young soccer consumers through various forms of digital media.

A very smart move to surf on the worldcup tidalwave of this year to test new forms of engaging the target group. Because if this turns out well, Google and Nike will roll-out this kind of approach to other sports, such as basketball, baseball, etc.

A series of short videos (by Wieden & Kennedy) is also part of the effort. The first one on that site being the one you can already see at joga.com.