As I just found out through these two blogs, Saab has launched a new microsite for their Saab95.

While the microsite features the usual suspects („tell a friend“, „take a test drive“, „watch the TV commercial“) there are two things worth mentioning. One thing I really enjoyed, the other one almost fascinated me.

What I enjoyed was the emo-clip. Probably at least 2 minutes long, it shows the car in action and a whole lot of motion. And that’s what I liked: it doesn’t just show the car as such. Quite a few times, the film is more artistic in nature, with nice effects and sequences of streets at night, etc.

However, what caught my attention: On most car sites, you get the typical 360 shot of the car. Some Java applet (or something similar), that let’s you spin the car around and look at it from all sides. If it comes to worst all that is even shown on a plain white background.

Saab (who’s their agency?) has created a little story around these 360 shots that makes it all the more worthwile exploring the entire site: you see the car stopped in the middle of a swedish forest – I guess the TV trailer spot acts as a prequel to explain what’s happening on the microsite. It just sits there, within that snow covered scenery (think of stereotypical Sweden!). An in the dark, you can see the eyes of several animals living in the woods.

By clicking on these animals, you can look at the car through their eyes, which allows you at the same time to take different viewing angles of the car. For example: the red fox looks at the front of the car – sort of from below, because he’s small – while the moose looks at the back of the car. And because the moose taller, he can also look through the rear window onto the dashboard of the car, so you can see the inside. 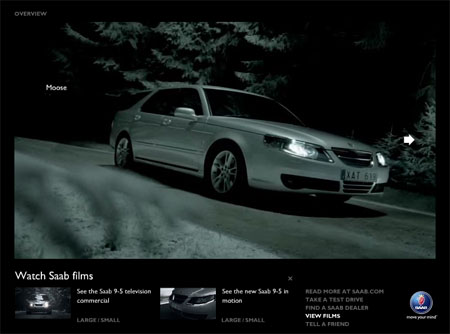