So Google has launched „buzz“, which is a social network simulating extension to GMail, if you ask me. You can share photos, videos, status messages – and people can follow your profile, see what you share and comment on it in real time. Apparently. I haven’t found anyone yet to „buzz“ with.

It’s supposed to be an attack on sites like facebook or tools like twitter. I just wonder, if it is strong enough to get people of these two other services. They are quite sticky already, especially facebook, since they’re offering lots of functions, games, content upload options, etc. – and quite many people have established their network on facebook, it will take some persuading luring these network-settled people over to a new network.

Anyway, how does that align with Google Wave? Will they integrate the two at some point? Or will Buzz just be for sharing, chatting and connecting while Wave will be more about real collaboration? We’ll see… And see this video here, it explains the main points in less than 2 minutes:

(UPDATE: here is another good take on the whole launch, including the relation to Wave.)

Book a flight on Oceanic Flight 815 if you want to get lost.

I am badly hooked on the series „lost„, as I wrote in my German Blog already. The sixth and supposedly last season started yesterday in the US (the parts are available in Germany always one day later), however in the last couple of days / weeks a few marketing gigs have already taken place. Such as this one: you can book a flight on Oceanic 815 from Sydney to L.A. on kayak.com – for a horrendous price, of course. Quite a nice idea! 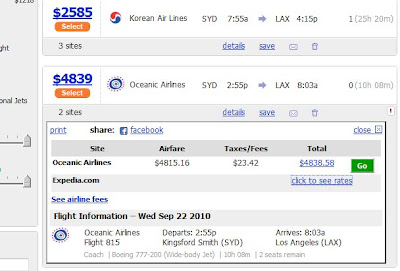 This is a real challenge for ad experts. The following video is a huge collection of TV spots. It was made as part of the launch of the new identity of the Creative Circle awards in the UK. As adverblog writes, there are more than 78 spots referenced in this single video. Or, at least, that’s the highest number found so far. How is your score? (Mine is pretty bad)